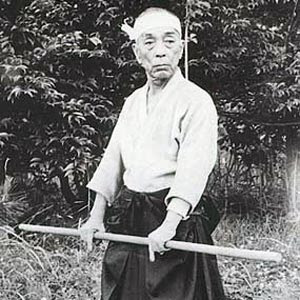 Little is known about Ninjutsu – since it’s been open to the West in only the past 30 years. Where does it come from? What inspired masters to keep with their training? How did they begin? Where here is a little background that goes past what is considered ‘common knowledge’ that is really not so common.
Articles and discussions on Takamatsu Toshitsugu Sensei, Hatsumi Masaaki Sensei, and Manaka Unsui Sensei seem to be relatively abundant in the martial arts community, and more specifically, in the Takamatsu-den community, but for some reason the man behind most of what we study today is often overlooked.
Toda Shinryuken Masamitsu was the 32nd soke of Togakure Ryu ninpo, as well as soke of Gyokko Ryu Kosshijutsu, Koto Ryu Koppojutsu and Shinden Fudou Ryu Jutaijutsu/Dakentaijutsu. He was also soke of two lesser-known ninjutsu schools, the Kumogakure Ryu and Gyokkushin Ryu, all [excluding Shinden Fudou Ryu] of which he inherited from his father, Toda Daisaburo Chikahide, who had in turn inherited them from his father, Toda Eisaburo Nobumasa. Togakure Ryu Ninpo was passed down hereditarily within the Toda family for 10 consecutive generations, from 1624 with Toda Nobutsuna Seiryu until 1968, when it was passed on to Hatsumi Masaaki. (See Togakure Ryu genealogy below. )
Toda Shinryuken Masamitsu was a renowned swordsman, and was appointed as the first chief instructor for the Tokugawa government’s military school in Kyoto, which was established in February of 1855. His skill soon earned him the nickname “Hiken Shinryuken”, or “Secret Sword” Shinryuken, at the academy.
In August of 1855, two people he had great respect for, Matsushira Norimasa and Matsuhira Tadamasa, were both dismissed from the council and replaced by Hotta Masaatsu and Ii Naomori. As Matsushira had been the one who initially appointed Toda for his position as chief instructor, Toda promptly resigned upon their dismissal.
After a brief period spent in solitude, Toda Sensei opened a Shinden Fudou Ryu dojo around the Kobe area, where he instructed his grandson Takamatsu Toshitsugu on the teachings of the lineages he was soke of, at his son-in-law’s request. Young Takamatsu’s training was very rough, and he was often brought to tears at the hands of Toda’s senior students, who tossed him around violently. During Takamatsu’s study of Koto Ryu Koppo Jutsu, he was forced to strike into sand, gravel and rocks until he bled. Toda Sensei never consoled his grandson, and instead forced him to continue training regardless of the pain, as he had promised to make a warrior out of him.
Toda Sensei is said to have told Takamatsu Sensei that, “Even when you are faced with death, die laughing”, and passed on all of his lineages to a then 22-year-old Takamatsu, before dying on December 6th, 1909.
The Genealogy of Togakure Ryu Ninpo is:
1) Togakure, Daisuke 2) Minamoto no Kanesada, Shima Kosanta 3) Togakure, Goro 4) Togakure, Kosanta 5) Koga, Kosanta 6) Kaneko, Tomoharu 7) Togakure, Ryuho 8) Togakure, Gakuun 9) Kido, Koseki 10) Iga, Tenryu 11) Ueno, Rihei 12) Ueno, Senri 13) Ueno, Manjiro 14) Iizuka, Saburo 15) Sawada, Goro 16) Ozaru, Ippei 17) Kimata, Hachiro 18) Kataoka, Heizaemon 19) Mori, Ugenta 20) Toda, Gobei 21) Kobe, Seiun 22) Momochi Kobei 23) Tobari, Tenzen 24) Toda, Nobutsuna Seiryu 25) Toda, Nobuchika Fudo 26) Toda, Kangoro Nobuyasu 27) Toda, Eisaburo Nobumasa Hoyei 28) Toda, Shinbei Masachika 29) Toda, Shingoro Masayoshi 30) Toda, Daigoro Chikahide 31) Toda, Daisaburo Chikashige 32) Toda Shinryuken Masamitsu 33) Takamatsu Toshitsugu 34) Hatsumi Masaaki

As a Free gift, please download this brief PDF outline of the benefits of traditional training for your modern life.